Well, it’s been a while since I’ve posted and I just wanted to give you all an update. October has been busy, but I wanted to give a shout out to 2 games that I beat this month that just nail it when it comes to storytelling. Love esquire and Outer worlds. I’ve looked into Love esquires data files to see how they handle VN scenes and it’s helped improve my own system. 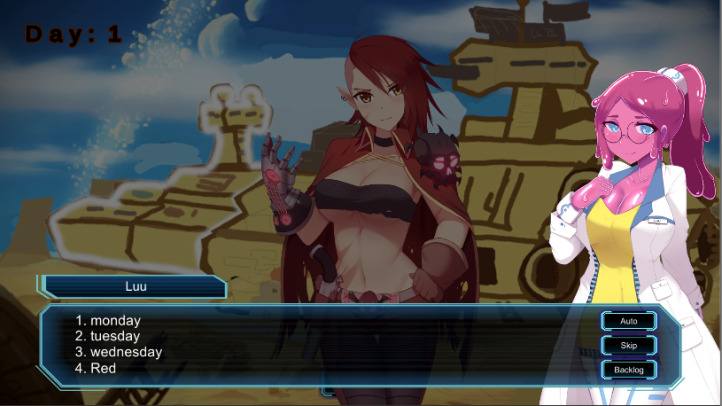 (note: this is made in Unity which is a different engine then Star Girls and this screen shot is super alpha)

In Star girls, the script is formatted in xml (mainly for readability and parsing) but the file form become hard to deal with because each in-game line took up a lot of space and all the scripts were built by hand.

(note: script taken from honey transformation01part2 file. If you want to check it out the files can be opened at resources/script)

In the new game, I’ve revamped the system so that a whole scene looks like this (just a script for testing not actually part of the game).

I’ve taken 10 lines of XML and turned it into one line. On top of that, I create a GUI tool to build my script for me.

What does this mean? Well, I’ll have a lot more branching narrative in the next game and it will take me less than half the time to make and fix dialogue scripts.